It’s possible I got too polemical in my review for the Chronicle:

“To hear many New York critics tell it, the heavens opened and angels sang from on high to greet Alexei Ratmansky’s “Russian Seasons” at the New York City Ballet three years ago. But if this is God’s gift to contemporary ballet choreography, perhaps the art form is as imperiled as doomsayers claim. Judging from a first viewing of “Russian Seasons” on Tuesday during its company premiere at San Francisco Ballet, Ratmansky’s rapturous reception attests more to the oft-lamented dearth of great new ballets than it does to the young Bolshoi-bred dance maker’s savior status. 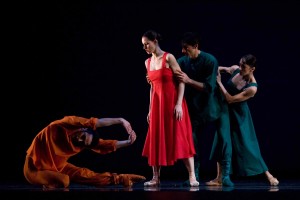 Which is not to say “Russian Seasons” is a bad ballet. An affectionate study of the Russian temperament set to Leonid Desyatnikov’s subtly rustic and dissonant suite of songs (some sung by mezzo soprano Susana Poretsky), “Russian Seasons” has a charming ease with folk gesture, a refreshing way of creating character and a pleasing narrative ambiguity. Galina Solovyeva’s Crayola-hued costumes are winsome, and the sweetly framed melodrama and penchant for tragedy suit Lorena Feijoo and a richly human Sofiane Sylve especially well. Young Isaac Hernandez had muscular yet clean technique and unaffected presence.

But Ratmansky’s simple style is hardly earth-shattering, and the episodes grow repetitious. “Russian Seasons” would be twice as satisfying at half the length. 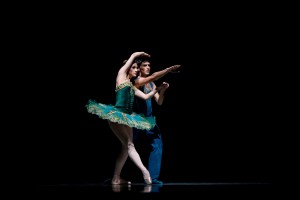 Ratmansky’s wild acclaim is more befuddling with “Russian Seasons” placed next to Jorma Elo’s blood-pumping “Double Evil.” Building on alternating selections of heart-racing Philip Glass and elegiac Vladimir Martynov, Elo delivers a romp of effortless invention, risk and freshness – yet several important critics have dismissed this as “hostile to classicism.” I daresay the objections are born of a generation gap.”