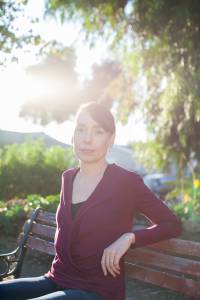 Rachel Howard is a writer of fiction, personal essays, memoir, and dance criticism. She was born and raised in California’s agricultural Central Valley, where one night at 4 a.m. her father was murdered as he slept in a bedroom down the hall; Rachel was ten years old. Stan Howard’s murder has never been solved. Rachel wrote about the night of the murder, and its aftermath, in her first book, The Lost Night, a memoir published in 2005. The book’s narrative turns on resisting the pressure of popular culture to place all hope of “closure” in true crime’s idea of justice, and to instead seek a deeper, if more emotionally complex, peace. The New York Times wrote, “The Lost Night is enthralling, a skillfully narrated story that begins as a tale of detection but quickly becomes something more.” The San Francisco Chronicle called it “Powerful . . . more intense and real than your typical true-crime story.” Ira Glass interviewed Rachel about the murder for an episode of This American Life, which you can listen to here.

After graduating from the University of California at Santa Barbara’s College of Creative Studies, Rachel began a career as a dance critic in San Francisco. She has written about dance for the San Francisco Chronicle for nearly 20 years, and continues practicing dance criticism to this day, also writing for the Fjord Review.

Rachel paused her work as a dance critic in 2009 in order to concentrate more fully on writing fiction. To support herself while living in Oakland at that time, she became a full-time artist’s model, a six-year vocation she wrote about in an essay published by Gulf Coast.

Rachel’s debut novel, The Risk of Us, was published by Houghton Mifflin Harcourt in 2019. Dept. of Speculation author Jenny Offill describes it as “an emotionally complex and amazingly suspenseful novel about love and fear.” Jamie Quatro, author of I Want to Show You More and Fire Sermon, said “I’ve never read anything so beautiful about the intricacies of adoption—the process itself, and the seldom-talked-about aftermath. The prose is elegant and compressed; I often had to stop reading to catch my breath. Anyone who has ever loved a child, in any capacity, should read this book.” The Associated Press called The Risk of Us “a simply gorgeous novel.”

Rachel is a graduate of the MFA Program for Writers at Warren Wilson College and a fellow of MacDowell. Her fiction and nonfiction has appeared in StoryQuarterly, Gulf Coast, Zyzzyva, Waxwing (nominated for a Pushcart Prize), O Magazine, the New York Times Magazine, Berfrois, the Arroyo Literary Review, the Los Angeles Review of Books, and many other venues.

She lives in Nevada City, CA, where she founded Yuba Writers’ Workshops, which has offered free community classes such as “Reading Chekhov for Our Times.” For five years she ran a highly popular live reading series, Yuba Lit, a fiscally sponsored project of the Nevada County Arts Council.

Rachel was raised without religion and converted at Episcopal Grace Cathedral, in San Francisco, when she was 24 years old; her spiritual life is now primarily informed and influenced by both Christianity and Buddhism. For twelve years she has taught creative writing through Stanford Continuing Studies, where she created a “Writing About Spirituality” course, featuring readings from a multiplicity of faith traditions.

Rachel has also taught at Warren Wilson College as the Joan Beebe Teaching Fellow and the Interim Director of Undergraduate Creative Writing, and as a Distinguished Visiting Writer at the MFA program of St. Mary’s College of California.

She is currently working primarily on short fiction and essays.