on the cutting room floor

I reviewed the Bolshoi?s Raymonda for the Chronicle. I liked the performance quite a lot, especially after the dismal ?Romeo and Juliet,? but not quite as much as the review, which was cut, might lead you to believe.

Here are the excised bits:

?Though this 1984 production was refurbished in 2003, the d?cor recalls the Grigorovich ?Swan Lake? seen in Berkeley two years ago: He-Man wigs for the men, a brown and turquoise palette even Medieval courtiers would have found garish, lighting alternately bright as a grocery store and dim as a swamp.

But while the Grigorovich ?Swan Lake? was also dampened by murky psychologizing, this ?Raymonda? didn?t require an analyst. The trappings looked dated, the dancing timeless.? 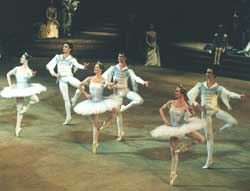 Meanwhile, Allan Ulrich had a different take and made the most of the internet to compellingly support it. Not willing to write “Raymonda” off as a mere vehicle for dancing, he writes:

Rather, what we should ask is whether what one saw on the stage Friday (Nov. 5) added up to cogent storytelling. Not by any stretch of the imagination with this Raymonda. The narrative arc is seriously skewed. I doubt if Petipa would have followed up a public pas de deux for his protagonists with an intimate duet 20 minutes later; his sense of structure was better than that. I suspect Petipa would not have Raymonda fall asleep under a pillar. And I am sure he would not have portrayed Abderakhman?s retinue with the ludicrously bowing and scraping corps that Grigorovich puts on the stage. Act 3, which contains the best pages of the Alexander Glazunov score (much cannibalized by George Balanchine and others), is sheer divertissement and the most satisfying portion of the Bolshoi version.

Given the absence of physical allure, this Raymonda was a strange choice for an American tour.”

This is a difficult review to excerpt; I really do recommend reading the entire thing.