My review of Yaelisa & Caminos Flamencos actually ran in the Chronicle yesterday, but I was just able to find it online this morning:

The sassy, mono-monikered Yaelisa is one of her form’s most prolific local proponents and the founder of the New World Flamenco Festival in Irvine. But she’s also spent her last 14 years in the flamenco-crazy Bay Area training a new generation of dancers. And in the company’s latest show, which played the Yerba Buena Center for the Arts Theater over the weekend and repeats at San Jose’s Mexican Heritage Plaza on Thursday, she hands the spotlight to a protege of dazzlingly soulful maturity.”

I’m no flamenco expert, but I’m seeing and loving the form more every year. And the one flamenco experience that remains most vividly in mind for me is Spain’s Eva Yerbabuena. I reviewed her for Voice of Dance last year:

“Advance buzz from those who should know had it that Eva Yerbabuena was the hottest flamenco dancer now working in Spain, not to be missed. And from the moment La Yerbabuena took the Zellerbach Hall stage Saturday with her crisp articulation and a sense of intention so focused that every movement had the force of fate, it was clear the aficionados had it right. But there was a surprise as the evening unfolded, more striking as each number of the seamless 90-minute Eva, now touring North America, passed. This is impeccable choreography, a new model for transferring an intimate art form to the proscenium stage.

Yerbabuena, who has run her own company since 1998, is a minimalist: She deploys six dancers and seven excellent musicians, no sets to clutter Raul Perotti?s dramatic lighting, and simple but stunning costumes. But the understated radicalism of her approach runs deeper than this.

She uses her dancers not as personalities but as elemental presences. Her dances have a compelling formal logic, so that each unexpected entrance or departure feels simultaneously inevitable. Eva has drama in the same way that, say, Balanchine?s Concerto Barocco has drama. It is cool, sometimes distant, without even a glimmer of story (the men and women hardly look at one another), and yet you are on the edge of your seat to see what happens next. In essence, Yerbabuena has filtered a deeply expressionistic dance form through her own abstractionist sensibility.”

Closer to home, the Bay Area is fortunate to have Theatre Flamenco, the elegant La Tania (who’s performed memorably with, among other groups, LINES Ballet), and of course Yaelisa, whom I also reviewed last year: 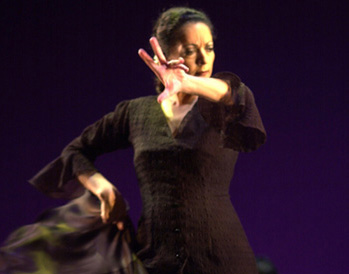 “At the end of Caminos Flamencos? latest full evening show “Mujeres,” a richly deserved bouquet appeared for the company?s artistic director and star dancer. Yaelisa extracted a rose and tossed it to the audience. She paused, narrowed her eyes mischievously, and revved up as though to throw the whole bunch. Almost everyone laughed but no one ducked. Yaelisa was just being playful again.

That playfulness is the hallmark of Yaelisa?s dancing, and it sparkled last weekend in two lengthy, tour-de-force soleas. Her performance alone would have earned the sold out crowd?s instantaneous standing ovation. As it happened there was so much more to applaud: sultry musicianship that turned a rainy San Francisco night into an evening in Seville, sumptuous costumes and lighting, and daringly simple stage design that lent Yerba Buena?s vast theater the intimacy of a Spanish caf? while shining the spotlight on gutsy dancing.”

And of course there are so many other flamenco groups in and near San Francisco, and so many I haven’t gotten around to seeing. If you’d like to check them out, the Flamenco Events Calendar is a good place to start.