Aszure Barton does not waste time. Given a month to make new work in Santa Barbara’s Lobero Theatre, the New York-based choreographer clocked in 12-15 hour days with her dancers, seven days a week. The result, offered up Friday and Saturday along with a medley of Aszure & Artist’s past hits, ought to set some kind of Guinness world record for insane choreographic productivity: 50 full minutes of a work-in-progress, much of it already beautiful, thought-provoking, and physically astonishing.

I did not drive down to catch the inaugural performances of Santa Barbara DANCEworks as an impartial observer. I’ve followed the doings of DANCEworks founder Dianne Vapnek since 1997, when I was a green, not-yet-out-of-college dance critic for the Santa Barbara Independent, and Vapnek was founding Summerdance Santa Barbara. I’m an unabashed fan and supporter.

For the first year of Summerdance, Vapnek brought the sweeping and eloquent Doug Varone and Dancers into town; over the decade of festivals that followed she showed a penchant for contemporary dance with wit, edge, and more than a little sexiness. Among her choices were the deliciously campy Doug Elkins, the rigorous but winking minimalist Brian Brooks, and the swiftly rising Larry Keigwin. Now those artists form the roster Vapnek will initially draw upon in her new DANCEworks partnership with the Lobero, with the mission shifted from presenting to creation.

You couldn’t ask for a more potent kick-off than Aszure Barton, who came to Summerdance in 2005, and whom Bay Area audiences know from her national tour with Mikhail Baryshnikov as one of the first residents of the Baryshnikov Arts Center in 2006. “Busk,” the work-in-progress unveiled last weekend, was trademark Aszure & Artists, shot through with a sense of the sacred and the profane, and how the two are closer than we believe. Wearing black hoodie sweatshirts that sometimes stretched with the anguish of Martha Graham’s “Lamentation,” and sometimes created the eerie look of medieval monks, the dancers delivered a wildly ranging meditation on performing and pandering, taking and giving. 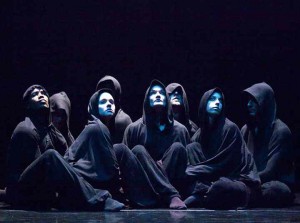 There was a muscle rippling pseudo-tap shuffle by the superhumanly supple Jonathan Alsberry; a gorgeous video, shot beneath the Santa Barbara wharf by filmmaker Kevin Freeman, of the dancers clustered in their hoods, moving their heads like birds; a recurring role for a disaffected beauty in Mickey Mouse ears; and a wildly aerobic klezmer-influenced solo for Banning Roberts, transformed by a white tunic into some kind of Goddess Diana. 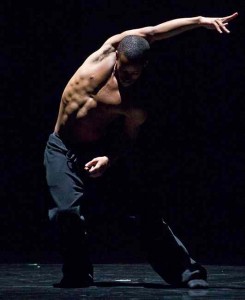 Two things set Barton apart right now. First, on top of her luscious mix of movement influences, Barton has a riveting way with uninhibited gesture. Her performers dance with their eyes, their toes, their tongues, their little pinky fingers. In “Busk” as it now stands, the dominant gesture is a hand outstretched with thumbs rubbing fingers to ask for money; when Charissa Barton dances a solo in a society-length gown and sparkling diamond ring, this becomes a grabbing, taking gesture; and later in duets (Roberts flying high with her thighs wrapped around Stephan Laks’s face) it becomes a sort of alligator-mouth hand-puppet gesture, both naïve and weirdly sinister.

Second, Barton has assembled a captivating range of stage presences in her company. Laks is solemnly soulful, the acrobatic Reed Luplau is charismatic and sweet, Michelle Mola glumly aloof, Ian Robinson (perhaps because he is tallest) commandingly dapper. The company incluces two Barton sisters—dignified Charissa and the womanly Cherice. And then there is Roberts, who has indeed grown into a goddess of strength. 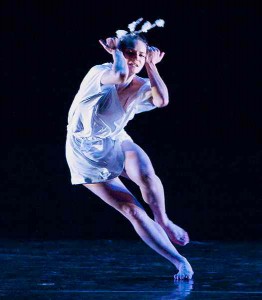 What their efforts in “Busk” become will unfold in May at Alberta’s Banff Centre, where Barton will create the work’s second half, collaborating with composer Lev Zhurbin. Meanwhile, Santa Barbara DANCEworks is already looking towards a second season, tentatively set for next April, with space and support also secured for 2011. It is truly a bright spot on the national dance scene.