I reviewed Nora Chipaumire’s solo show “Chimurenga” Saturday–not for the Chronicle, but for the Dancers Group publication InDance. If you’re at all interested in Bay Area dance and have never checked out that paper, you should. It’s been reinvigorated under its latest editor, Bonner Odell (in fact, Dancers Group as a whole has been reinvigorated by the return of Executive Director Wayne Hazzard), and though it’s now available by subscription only, the comprehensive performance listings alone make it worth the price. InDance has granted me permission to also post my review here (see below), but please also consider chipping in for a subscription. Click here to learn all about Dancers Group.

Next week I’ll be reviewing the Erika Shuch Performance Project’s new “51802” at Intersection for the Arts, and Chris Black’s new outdoor baseball-themed show, “Pastime,” at a park near you. See you at the theater, or in this case, at the ballgame.

And without further ado:

I don?t think anyone breathed during the last twenty minutes of ?Chimurenga,? Zimbabwe-born Nora Chipaumire?s one-woman show. You could feel the audience grow rigid with suspense as her entrancingly roiling shoulders gave way to joyous African shakings and stompings, as she stood at the front of the stage shouting ugly epithets??kaffir,? ?woolie??that slowly morphed into softly whispered remembrances?the smell of rain on sand, the taste of Mazowe orange juice. That last item brought knowing hisses of ?yes? from the fellow Zimbabwe natives present at ODC Theater, a final burst of release. The standing ovation was immediate. 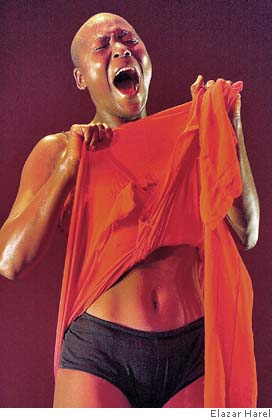 It was a powerful return for a singular dancer well known in the Bay Area, a Mills College grad who performed with a host of local companies before joining New York?s Urban Bush Women in 2003. Tall, shaven bald, arrestingly muscular and yet feminine, Chipaumire is her work?s own best asset. And yet ?Chimurenga? does not merely showcase her beauty, and does not rely on sociological topicality. Though Chipaumire lived through Zimbabwe?s war for independence, and through much of Robert Mugabe?s subsequent regime, there are no discernible politics in ?Chimurenga,? only anger, grief, and hope. At its best, ?Chimurenga? transforms these into pure movement imagery.

The dance was made in three sections over the last five years, partly at ODC?s own Pilot program, and it progresses from the oldest and most amateur material to the newest and most accomplished. Consequently, the first two-thirds of ?Chimurenga? are slow going. In the opening section, ?Kaffir,? you can see Chipaumire taking first steps towards discovering her own movement vocabulary, and more importantly her own movement dynamic?she toys with a crooked raised leg, doesn?t do much interesting with it, then resorts to miming throwing rocks, a motif that is too literal in execution to reward so much repetition.

In ?Convoys, curfews, and roadblocks? that raised leg becomes more interesting, hovering to tip her torso towards a square of light, and Chipaumire?s shoulders take on their own character, sensuously rolling, like the movement of muscles through a snake. But it isn?t until the final section, ?Pungwe/musingoutloud about the revolution,? that we see the distinctive Chipaumire, and it turns out she is a master of subtle illusion, in a starkly Expressionistic way that hearkens to the early moderns.

Here in the final section what was earlier a red shirt, stretched in Graham-esque ?Lamentation? pulls, becomes a billowing red dress, hiding Chipaumire?s legs as she kneels in funereal ritual, so that she seems to be hinging via slow levitation towards the ground. Sidelights play shadows with her arms, splaying symmetrical black splotches like butterfly wings behind her.

Chipaumire is aided enormously by Alex Pott?s sound score?as Beethoven?s ?Ode to Joy? first emerges on tinkling music-box notes, then a chorus singing the Rhodesian national anthem, and finally resolves into African drum rhythms, the effect is chilling, then triumphant.

At the end, surrendering to her verbal purge, Chipaumire speaks like a woman possessed, her voice rich and sonorous, her chin jutting in outrage, her face finally shape-shifting into a smile of delirious love for her troubled homeland. It is the voice of a woman immersed in her material, confident of her absorption in it and her mastery over it. And well she should be. The last third of ?Chimurenga? shows us the transformation from arresting dancer to promising artist.