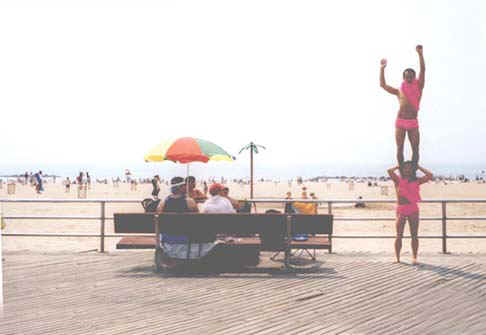 Brian Brooks?s ?Dance-o-Matic? is, to quote Balanchine, ?a machine that thinks?–but a machine that thinks pink! Everything at the Center Stage Theater–the backdrop, the floor, even most of the gamely pink-clothed audience members–was rosy Wednesday night for the first of two Summerdance festival shows. The mood was as giddy as the characters in a Hello Kitty boutique, but with a brainy twist. This machine may have been inspired in part by a laundromat vending device, but its workings are as serious as they are sudsy.

Brooks is a Brooklyn-based minimalist with a mathematician?s exactitude and an interior decorator?s passion for color. ?Dance-o-Matic,? created in 2002, has since been followed by last year?s all-green ?Acre,? and during this Summerdance residency, Brooks is working on a new piece that will start in white and burst into full spectrum. But the standing ovation crowd was pleased as pink punch with the limited palette Wednesday, as the five members of Brian Brooks Moving Company jumped in and out of a pool of pink floor-covering, bordered by pink fluorescent tubes and lit by Jeremy Morris. Eli McAfee contributed the sex-toy costumes, ranging from unisex ruffled panties and feather boa tops to slick hot pants.

Brooks is as single-minded a choreographer as he is a visual conceptualist. Each of the sections of ?Dance-o-Matic? starts with one clear movement idea and keeps evolving like an equation that grows longer and more mind-bending before magically reducing to a simple solution. One section of slides to the floor permutes to plank position rolls, and when the dancers break off into their own directions, it?s like origami unfolding. In the opening segment, set to naughty electronica music by Peaches, the company stands in line, arms pinned behind backs, and prances in ever more precise echoes of the vocal rhythms.

They pause with one leg raised like flamingoes in repose, a connection that is soon made explicit in Sarah Browder Venkatesh?s animated video clips. Following a trio of Peaches tunes, the lounge-lizard vibe is picked up in John Stone?s winking score. But not all is Florida-style cheesiness. When Stone?s music turns to soothing wind chimes, the dancers fall into file and swing their arms, first synchronized, then dissolving into seeming disorder like the blades of those energy-generating windmills I?ve seen on the 580 freeway. Their surprising realignments invite you to see order in chaos, design in nature.

Brooks is a former dancer with Elizabeth Streb, and ?Dance-o-Matic? is full of stunning athleticism. At the celebratory height of the show, the dancers toss pink balloons to the audience, filling the space like a bubble bath. When the fun is over, Brooks, Alexander Gish, and Nicholas Duran take the stage in silence. One jumps in the air and another pushes him mid-flight, like a balloon being batted in a new direction.

The effect takes amazing muscle power and timing, which Brooks?s dancers have in spades. Jo-anne Lee is the smaller, wonder-eyed ing?nue, often being carried across the stage like an effigy. Weena Pauly is more like Xena the Princess Warrior, able to catch a flying man above her head in a show of strength that doesn?t so much suspend the laws of physics as make you see them with a wondrous clarity.

All the sections have a formalist purity, but as with any formalism, there are very human themes to read in if you so wish. In the midst of all the liberation and sexy fun, Brooks walks on with a blue square which he places on the stage. The dance he performs in its confines is tense, fractured, and constrained, as he falls to his knees like a pigeon with clipped wings. Framed by the frothy freedom of the rest of ?Dance-o-Matic,? the solo is a sobering reminder of the restrictions of a ?straight,? ?normal? world.

The finale of ?Dance-o-Matic? is also somber, a series of crystalline solos and a lulling, harmonious full company finish. The audience?s attention held steady, prepared by the preceding light-heartedness to appreciate form as well as fun.

For excellent writing on ?Dance-o-Matic? by Chris Dohse and Deborah Jowitt, click here and follow the links.