A decade ago, I cut my teeth as an upstart dance critic writing about a new festival called Summerdance Santa Barbara. (Thankfully, those were the days before the Santa Barbara Independent started archiving their stories online.) The company inaugurating the festival was Doug Varone and Dancers, and they arrived like a welcome shot of sophistication upon Santa Barbara?s red-tiled tourist haven downtown. I?ve attended the festival most years since, in part for an excuse to visit the city I consider my second home, in part out of nostalgia, and in large part because my taste agrees with that of Summerdance executive director Dianne Vapnek. She?s made forays into flamenco and tap, and even imported a boot-clad dance theater troupe from the Netherlands, but mostly she likes New York modern dance companies with a bit of edge and a dash of sexiness, and she has a good eye for them. Her past choices include such mischievous talents as Doug Elkins, former Mark Dendy dancer Larry Keigwin (whose work struck me as green but promising), and Streb-alum Brian Brooks, whose campy minimalism is one of the freshest things I?ve laid eyes on.

For Summerdance?s 10th anniversary, Vapnek?s marquee attraction was the work of Aszure Barton, the young Canadian-born choreographer whose dances were recently featured on the program Baryshnikov put together to tout the fruits of his new Baryshnikov Arts Center, where Barton is one of the first artists in residence. I arrived in Santa Barbara during the festival?s busiest week: Doug Varone was creating a commissioned piece at lightning pace (16 minutes finished in five days); Robert Battle was setting one of his earliest works, the hard-driving ?Rush Hour,? on the local State Street Ballet, whose choreography-starved dancers were taking to it with grateful commitment; and Brian Brooks was leading the Summerdance Kids Connection, wherein Santa Barbara dance students mingle with kids from the less affluent Orange County city of Santa Ana for a week of all-day dancing. All of this came together rather movingly for Friday?s Choreographers Showcase, where Varone, Battle, and Brooks unveiled what they?d accomplished. But I?d really come to see more of Barton, and her program proved worth it.

It started with ?Come/Over,? the disaffected-hipster-romance romp I?d seen weeks earlier on the Baryshnikov slate, but a second viewing did not diminish its potency. I was still bowled over by sudden spasms of heartbreak; by the almost casually clever touches, like the guy standing on his head in the corner for no discernible reason; by the exquisite moment of tension when Barton stood on Doug Letheren as he executed a push-up, the eerie masochism of her wickedly smiling face heightened by the very real tenuousness of maintaining her balance. But now I was able to inventory more factors of how her choreography works. The vocabulary is fabulous, for starters. Barton trained at the National Ballet of Canada, and moments of ballet precision (a quicksilver arabesque penchee; a tidy rond de jambe executed with perfect clarity) punctuate her movement like sudden fireworks. Outrageously flexible backs and shoulders roll and roll like rivers; hands claw the air or suddenly reach for crotches; and faces melt from cruel laughter to despondency in a matter of well-calibrated moments. (Barton?s dancers, as you may have now surmised, are all wonders of fluidity and plastique.) But this only begins to explain what keeps Barton?s dances so unexpected. In the way she builds phrases and structures her dances, she is a trickster and a tease. She knows how to insert a dancey rhythmic passage here, a non-sequitur pause there, giving you just enough breathing space to be totally caught off-guard by what happens next. 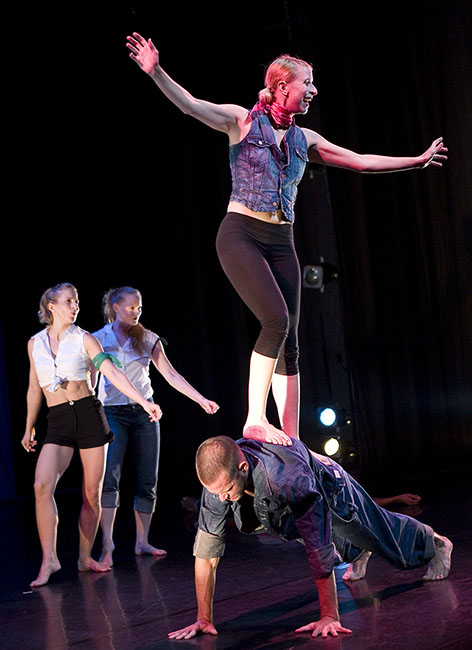 The extent to which she draws on every structural resource at her disposal became even clearer in two movement from 2006?s ?Short-Lived? that sent Letheren, Todd McQuade, William Briscoe, and the virtuosic Jonathan Alsberry prowling like panthers to tango-esque music. Their very walk was very simple but very specific: rolling down from the toes, hips sashaying in a way that looked absolutely sensuous but never campy. Certain solos toward the front of the stage went on too long, but just when you?d had enough, Barton would rearrange the space in off-kilter ways. Why, for instance, do two men do simultaneous solos with their backs to one another, facing separate wings? The space between them seems perfectly measured to upset any expectations of how these men relate to each other. And yet throughout the piece the men do pair up, one lifting another with his hands held in prayer around his lovers? slick chest. So many contemporary choreographers are trying on tango these days, but usually in winking, undangerous ways. The sensuality in ?Short-Lived? had spiritual, morbid undertones. I loved it.

But I loved that same sense of morbidity less in 2005?s ?Lascilo Perdere,? where it veered on portentousness. ?Lascilo Perdere? is a long piece, set to Vivaldi arias, stitched together with some gorgeous Gothic film by Kevin Freeman. The theme is loss, but it quickly gets played out: In an early section, chairs are placed across the stage, and Briscoe moves among them as a spotlight dawns on empty seats, moving from absence to absence; the point is quickly grasped and the musical chairs goes on and on without development. The many sections, some much more successful than others, feel as though they could have been rearranged in any other order.

But the final section is something I will never forget. Letheren dances to stage right, parts his mouth with wild pain, and sticks his tongue out; Ariel Freedman, Barton?s most spectacular dancer, makes her way to him and puts her mouth over his. You think they?re going to kiss?compelling enough?but then instead, Freedman clamps her teeth on Letheren?s tongue and uses it like a lever to draw him to the floor. She twists him into odd embraces and drags him across the room; the dynamic shifts and suddenly he is leading her, still connected by that tongue, into Baroque arrangements of limbs. It probably goes on for about three minutes, but the tension is so unrelenting that it feels like ten, and by about one minute in, that flagrantly pink wet tongue takes on very phallic overtones and the whole exchange becomes the most pornographic dance moment you have ever seen. When finally Freedman and Letheren separated, a thick string of saliva stretched between them, and that felt right. What such a brilliant theatrical device had to do with loss I never divined, but I was absolutely riveted, and felt that one duet had made the drive to Santa Barbara well spent. 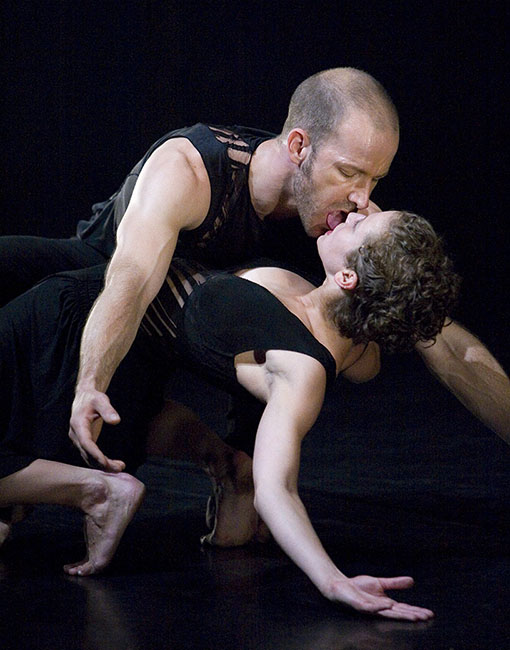 Letheren and Freedman in ?Lascilo Perdere.? Photo by David Bazemore.

Apparently I am one of few out-of-towners to undertake that drive; though Summerdance now has a ten-year track record of tapping intriguing companies, not much interest seems to extend beyond the Santa Barbara county line, and I have a few thoughts on this. Summerdance does much more then import companies from New York; the festival holds master classes, gives choreographers space and time to create new dances, and hosts open rehearsals and lecture-demonstrations. But to the outsider, Summerdance may look like just another presenter taking a few risks on interesting companies, and dance audiences in L.A. and San Francisco most likely would rather chance whatever UCLA or Cal Performances choose to bring in the fall than drive to Santa Barbara for a few isolated performances.

As it stands, the Summerdance calendar is not packed enough for a dance fan to make a week of it. As for the festival?s reputation, I think they?ve limited the word-of-mouth by commissioning only New York choreographers; one wonders if anyone in New York beyond the companies that directly benefit know what Summerdance Santa Barbara is. The festival has never brought in a West Coast-based company, and that should be remedied. The possibilities for artistic cross-pollination between artists on the two coasts would be well worth reporting on, and Summerdance could build more of a West Coast platform for itself rather than getting lost in the national picture. As it stands, Summerdance is a boon to the handful of choreographers it commissions and to the dance-curious residents of idyllic Santa Barbara. If it tapped both East and West Coast talent, it could be much more, and much more (I wager) well-known. Dianne Vapnek has spent ten years building an energizing, eye-opening festival, and God knows she?s not one to lose ambition. Who knows what the next ten years of Summerdance could bring.