My review of San Francisco Ballet’s Program Six for the Chronicle:

“Blame a contrary mood. Or maybe I was overwhelmed by the buzz of the New Works Festival. I wasn’t crazy about Christopher Wheeldon’s “Within the Golden Hour” when it premiered last year as part of San Francisco Ballet’s 75th anniversary bonanza of 10 new ballets. Whatever the cause of my blindness, its magnitude was obvious Friday, when “Within the Golden Hour” formed the sensuously danced centerpiece of the Ballet’s Program 6. 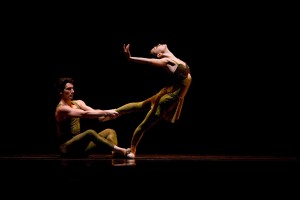 Is it taking a change of heart too far to say “Within the Golden Hour” is one of Wheeldon’s best works and one of the company’s finest hours? Because what struck this viewer Friday was what a clean, wide canvas the sweetly simple music of Ezio Bosso provides for Wheeldon’s habitually busy inventiveness. 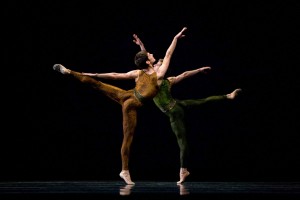 Garen Scribner (left) and Martyn Garside in “Within the Golden Hour.” Photo by Erik Tomasson.

As always with Wheeldon, “Golden Hour” is packed with novel motifs: stiffly swinging legs that evolve into all sorts of unexpected positions, rounded arms that suddenly become portals for a chain of men to thread through. But playing off Bosso’s innocent minimalist melodies, the effect is never overwhelming, fussy or mechanical. Bathed in the day’s last warm light, and costumed by Martin Pakledinaz in exotic turquoise and ambers, “Golden Hour” is mostly playful, sometimes serious, but always open-hearted.

It shows the company at its best. Everything is sculptural and clear but also soft. When Garen Scribner and Martyn Garside take a high jump and land in a crouch, they’re silent as cats. ”