It tolls for the froggy 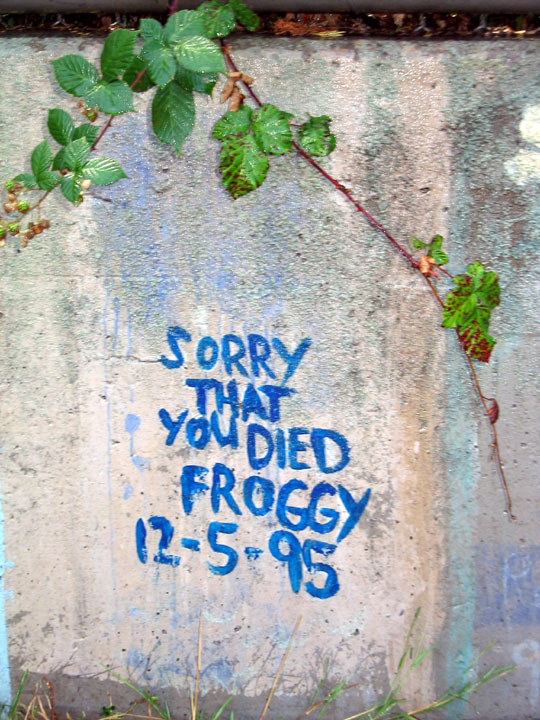 I took this photo at a makeshift pet cemetery tucked away in San Francisco?s Castro Neighborhood. It?s part of a longer story that I will make very short here.

My younger brother Emmet is a sniper with the U.S. Army, an occupation that inspires an uneasy pride in me. He?s scheduled to deploy to Iraq this fall. In June, he got some leave and came to stay with me. He?d just gotten into rock climbing and, via the Internet, had discovered a sharp 80-foot cliff smack in the center of the city. He said we just had to see this spot and enlisted me to help him climb and my mother to videotape.

The cliff was stunning, a slick sheet of striated rock fronting a small park. But just as remarkable were the tombstones that had been painted onto a three-foot high concrete wall that shored up the adjacent hillside. The practice had obviously begun at the south end of the park, where locals had painstakingly created memorials to ?Gym Sock: The Best Cat? and ?Kwanzaa: He hated other dogs, but he loved us.? 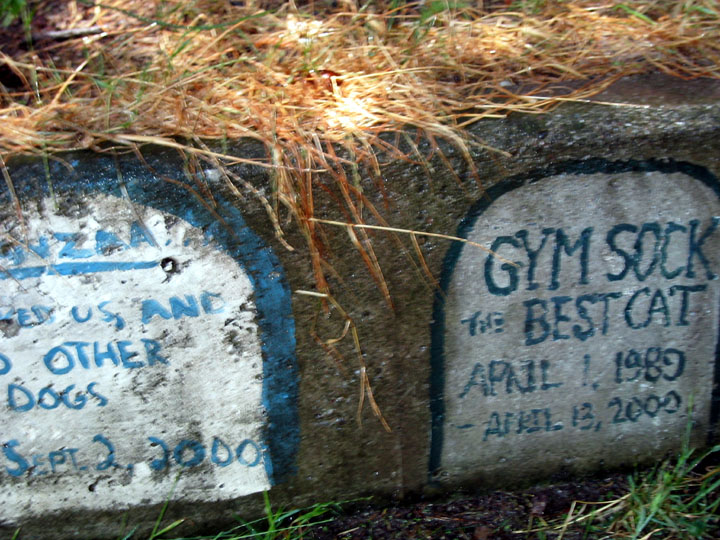 But on the north end of the park stood a preschool, and though classes were not in session, it was clear the little charges had taken over the animal funeral business. Their tombstones were drawn with ragged lines, with what looked like chalk, the colors run by the splashing of sprinklers. In their universe, ?lower? animals than cats and dogs deserved remembrance: there were gravesites for ?Sweetie Rabbit,? ?Gopher found by Hope,? ?Dead Bird,? and ?Baby Mouse.?

My brother scrambled straight up the rock, shoving his feet into tiny crevices, grunting as he reached for a new hold while I held the rope below, ready to halt his fall. He never needed me; he skittered onwards without pause. The climbing he did that day was dangerous?I am not adequately schooled in belay techniques and could easily have made a fatal mistake. But then, nearly everything he does is dangerous. And even as my mother asked ?Are you sure you should do this??, it seemed impossible that day, as it must have seemed to the preschool kids, that any of us could die.

My favorite tombstone was this one: ?Sorry that you died froggy.? It says so much about the child?s inability to grasp the full reality of death. I love the implication that death is a cause for simple pity, in the same way you might tell someone you?re sorry to hear they had the flu last week. It almost sounds, reading that grave marker, as though the poor froggy has been unfairly singled out. But perhaps we do owe consolation for death, to the dead as well as the living, even if it comes to every one of us.