Last night the San Francisco Ballet opened its 30th season with Helgi Tomasson at the helm with an onstage toast to his accomplishment: The transformation of a charming regional company into a sophisticated world player in the upper ballet echelon. Not surprisingly the famously reserved Icelander, who began his performing life in Tivoli’s Pantomime Theater before a sterling career in the New York City Ballet, didn’t speak. He didn’t have to. The company’s dancing had just spoken for him.

True to form, the evening was more somber and substantial than the usual gala bon bons, though the programming did not neglect to satisfy certain patrons’ sweet teeth, with Tiit Helimets and Yuan Yuan Tan spinning, arms held out like white wings and faces heavenward, in a saccharine excerpt from Helgi Tomasson’s “Caprice” (to swooning Rachmaninoff). But even if helpless ecstasy on sunset beaches isn’t your thing, you had to admire Tan’s earnest execution of the kind of role she is so often asked to sacrifice her entrancingly lithe body to in order to placate the box office gods.

I left the opera house struck by how much Tomasson’s ambitions have been aided by Tan’s gracious 20-year presence. She deserves a higher title than “principal,” something on the order of “prima assoluta.” (And she received due deference during the opening “defile” staged by Tomasson, in which everyone from the school’s tiniest students to the most veteran company members presented themselves for grand inspection, with Tan taking the crowning bow.) She is a woman of depth, though much of her repertoire does not allow her to show this. So it was doubly moving to see her as the anguished Tatiana in an excerpt from John Cranko’s “Onegin,” telegraphing with beating fists to Vitor Luiz all her frustration and anger. Covered ankle to wrist in 19th century dress, practically unrecognizable as the company’s lead glamour girl, Tan thrashed with a distress that made her vulnerability her strength.

Her command performance justified the inclusion of a distinctly un-gala-friendly pas de deux 2.5 hours into an evening in which Tomasson democratically displayed each principal. Frances Chung and newly hired Joseph Walsh were compellingly intimate in a crouching, too-long duet, Christopher Wheeldon’s “Borealis.” Maria Kochetkova and Davit Karapetyan’s musculature entranced in the bare-chested, bare-legged pas de deux from Yuri Possokhov’s “Bells.” Lorena Feijoo wins the prize for spontaneity in her girlish duet with Luiz in an excerpt from Val Caniparoli’s “A Cinderella Story.” Sofiane Sylve’s womanly pathos merged with the anguish of mezzo-soprano Erin Neff singing Kurt Weill from the pit for a section of Wheeldon’s “There Where She Loved,” with convincingly brutish Luke Ingham. Old-hand principals Joan Boada and Pascal Molat opened the evening like road-movie buddies in an excerpt from Renato Zanello’s “Alles Walzer.” And Vanessa Zahorian and Tara Domitro closed it pyrotechnically (though she a bit reservedly) in the warhorse 19th century pas de deux from “Le Corsaire.”

Among these small plates was a main-course serving—the U.S. premiere of “Souvenir D’Un Lien Cher,” to sections of Tchaikovsky’s Opus 42, by Alexei Ratmansky. Ratmansky is the choreographer in San Francisco Ballet’s rep most worth watching closely these days—he is the creator of the ambitious, ingenious “Shostakovich Trilogy” that premiered here last season and is truly the must-see ticket of the current offerings. But more than a chance to study his gift for merging a Russian sense of humanity with a contemporary take on formalism, Thursday’s “Souvenir” performance was my first chance to see Mathilde Froustey and Sarah Van Patten dance together, and it was delicious. They are both ravishingly beautiful women and movers, of course, both deeply musical and risk-taking, with outsized personalities. I had wondered if their extroverted presences would seem to compete on stage, but no. Froustey and Van Patten together consorted like childhood friends during the quiet moments of “Souvenir,” and tore through the air with complementary fierceness during the Scherzo. It was all luscious—like gorging on two desserts at once. (And I suppose a distracted viewer should mention that Carlo Di Lanno and Ingham were their dramatic partners in this mini-drama of infidelity.) 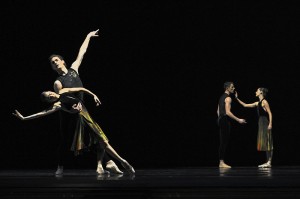 Tomasson always gives a nod to the future in his galas. In this case, a pride of young lions pawed with stunningly supple feet and lush musicality in Tomasson’s Baroque “Concerto Grosso”: Diego Cruz (much improved in recent seasons), Wei Wang, Francisco Mungamba, Max Cauthorn, and warm-hearted Esteban Hernandez. After the intermission, three up-and-coming women tore through William Forsythe’s cheeky “The Vertiginous Thrill of Exactitude.” I thought Dores Andre, Jennifer Stahl, and particularly Sasha De Sola lived up to the dance’s title; a friend who has observed the company longer than I swears the tempo of the Schubert was not as breakneck as in performances past, and though I do hold memories of superhuman past principals Tina LeBlanc, Kristin Long, Katita Waldo, and Julia Adam burningly in mind, I am confident the young women will in time live up to them. Mungamba and the always-polished Gennadi Nedvigin added their virtuosity to Forsythe’s classicism-on-steroids.

The season begins in earnest next week with Balanchine’s “Serenade” on Program 1, and with “Giselle.” In the latter, there are seven—count ‘em seven—casts. I’m particularly interested to see Frances Chung’s debut in the career-benchmark role, and to catch Mathilde Froustey in her second go, after her very touching Act I last season. But Sarah Van Patten, Vanessa Zahorian, Yuan Yuan Tan, and Lorena Feijoo each have special strengths. (Feijoo’s rounded, forward-leaning, Romantic-period-correct arms—learned in Cuba—will make you see the ballet anew.) And Maria Kochetkova’s “Giselle” is one of the greats. You can see the scheduling here.