When a friend of mine who edits San Francisco State’s alumni magazine asked me to interview the Photorealist painter Robert Bechtle, I couldn’t resist. By coincidence, I had just seen the mesmerizing Bechtle retrospective at the San Francisco Museum of Modern Art and I knew it would be an honor to talk to him. The resulting story isn’t my most stylish writing, but it was wonderful to stretch myself beyond dance, and apparently Bechtle approved. Here’s the top:

“On a rainy March afternoon, Robert Bechtle stands in the basement studio of his Potrero Hill home, impatiently considering a canvas. Just months ago, Bechtle’s name flew on banners around Union Square, and thousands had visited the San Francisco Museum of Modern Art to see the first large-scale exhibition of his work. But for Bechtle, who taught painting at SFSU for more than 30 years, the buzz of celebration has been replaced by the frustration of getting back to work.

On the canvas, brown lines sketch a row of suburban homes. “This is revisiting an earlier painting, which is something I’m interested in doing, because it will come out totally different,” he says in a soft voice, touching his wiry white beard. 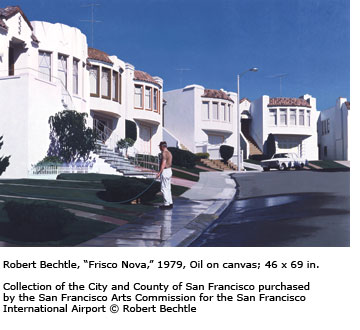 He doesn’t just mean that the trees are now taller, and that a blue car is now parked on the street. The differences will be both more nuanced and more personal. After all, Bechtle does not draw and paint freehand, but projects his photographs onto canvases before meticulously filling in the details — a process that, when he first adopted it four decades ago, struck him as “slightly naughty.” He is the leading figure of the Photorealist school of painting, one of the most noted art movements of the late ’60s and ’70s. But while his works entrancingly re-create the look of an old family snapshot, the photograph is just a starting point for his art, opening up myriad choices about color and proportion, texture, and what Bechtle calls “a certain amount of fakery that is just technique.”

His subjects are as distinct as his methods — placid streetscapes and ’60s-era cars, backyard barbecues and other outtakes from middle-class family life, all awash in pale California sunlight and suffused with a subtly sad nostalgia. The paintings impart a strange feeling of loss, but they began as an attempt to avoid emotionality.”

Click here for the rest, and more gorgeous paintings.