Last night at an art opening, a woman who?s been disappointed by one too many undercooked Bay Area dance shows asked me what I?d recommend in town, and I was happy to have an enthusiastic answer on the tip of my tongue. Scott Wells and Dancers? ?Over You,? which opened Friday at cozy Counterpulse, is one of those shows that reminds me why I?m so glad to live in San Francisco. It?s raucous, it?s devil-may-care, it?s full of community spirit?but it?s also deceptively well made. 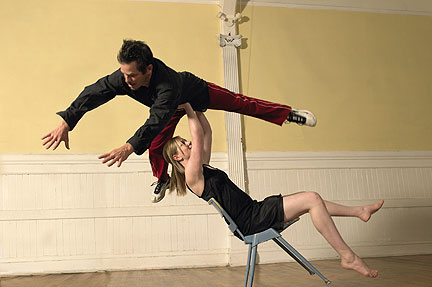 Scott Wells and one of his fellow dancer/stuntdivers.

Wells is one of the country?s leading Contact Improv teachers, which means he sends his dancers flying into one another’s arms, surfing atop each other’s shoulders, and otherwise peeling off of and vaulting onto one another in startling displays of trust. His dances are packed with stuntmanship, but he also knows how to craft a mean musical phrase. ?Goodbye, Goodbye, Goodbye? isn?t great only because Nirvana?s ?Smells Like Teen Spirit? makes Contact Improv-derived partnering look like a convincing stand-in for a mosh pit, but because in the midst of seeming chaos Wells punches you out of nowhere with steps so catchy you want to get up and dance them yourself. ?Home,? a reworking of Wells? first commissioned piece (for the Bates Dance Festival), also benefits from a rock-out soundtrack, turning a couch into a trampoline for Hallie Aldrich, Lindsay Gauthier, Suzanne Lappas, and Kegan Marling to the music of the Talking Heads, Jane?s Addiction, and others. Wells?s longtime cohort in craziness Jesselito Bie makes one of his most memorable appearances, lounging in a Hugh Hefner-style smoking jacket before slamming himself, with sumo-wrestler worthy grunts, into a kitchen table.

According to Wells himself, this show is just a warm-up for next year?s 15th anniversary season, for which he has more ambitious plans. But while the dances now on offer aren?t made for the ages, they?re smartly built and thrillingly executed. I?m glad I didn?t miss them.

UPDATE: Danceview Times’ Paul Parish enjoyed the show as well, and dedicated some time to a headier analysis of it:

” “Over you,” the clever title of Scott Wells’s new concert of contact-improv-based dance, had its opening night at Counterpulse in San Francisco. Wells has become over the last fifteen years the Paul Taylor of Contact Improv ? that is, the first to make dances in this idiom that are deeply musical, somehow “normal,” imaginative, witty, often hilarious, sometimes fierce, but always respectful enough of the concerns of the general public so that the audience in Peoria would feel they had something at heart in common. In Wells’s case, perhaps as in Taylor’s, it’s rooted in a profound need to reconcile deep oppositions, softened and lightened by a Zen attitude towards the impossibility of it. For Wells, it looks like to me (and I follow Wells as some movie-goers followed Kieslowski) these oppositions are between art and athleticism, the masculine and the feminine, the almost disembodied breath of music and the deeply muscular nature of movement, and the aggressive and the passive modes of being. ”