The Jon Sims Center for the Performing Arts is a tiny, unassuming venue on Mission and Eleventh Streets with some truly wonderful residency programs for choreographers. The main performance space has three tiers of risers for a total of maybe 30 seats, and an elevator door at the back of the stage area that resembles the entrance to a meat locker. Accordingly, the fourth home season for Alma Esperanza Cunningham Movement is low-tech; the lighting is rudimentary, and the four dancers wear black bathing suit-like trunks and tanks. The 40-minute premiere, ?sheshesheshe,? is performed in silence; reportedly Cunningham commissioned a score that didn?t work. But though the trappings aren?t spectacular, the movement is engrossing. I saw the piece last Friday?the run continues this weekend and next?and never for a minute was I bored. 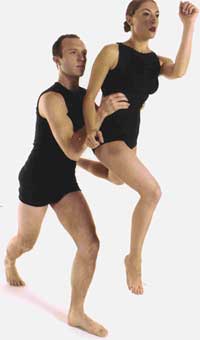 Cunningham trained at the Marin Ballet School as a child, and her work uses a high center of gravity and balletically precise legs. Arms are often pinned to the sides, torsos torquing a la that more famous Cunningham, but Esperanza Cunningham is less intensely interested in the tweakings of anatomy, more drawn to overtly emotional gesture. She?s made rigorously formal works, and outright theatrical ones too. I followed her work closely until the unveiling of a dance set to David Bowie songs that was clever in parts, unbearably self-indulgent in others. I was excited to see with this latest piece that Cunningham is worth following again.

?sheshesheshe? (a better title is in order) describes itself as investigating ?the space between individuality and community through a series of tasks that illustrate the complexity of relationships regardless of gender and/or sexual orientation.? I was hard-pressed to identify the tasks at play, and the gender-bending aspects of the piece are old hat. But I was thoroughly absorbed by the intimacy and the atmosphere of risk. Kate Filbert and Ryan T. Smith face the audience as she raises her leg in a high side extension that evokes the traditional grand pas de deux. But with some more manipulation, she falls like a plank to the floor. After much running circles, a tango-like two-step, and a snippet of stylized kickboxing, they stand and stare at each other, not seeing one another at all.

Rosemary Hannon and Wendy Rein enter, walking with high retir?s like exotic birds, suddenly jutting squiggly hips. One woman hits the other?s elbow with her head, which sets off a shifting of shoulders like dominoes falling. They hug?and suddenly they see each other, deeply. Hannon tilts Rein upside down, and Rein walks her fingers along her body and across the floor. Later, after our main couple returns for a tense slow-dance, like nervous kids at the prom, both groups will do the finger-walk. Stasis this is not.

The dancers are gorgeous. Filbert has a rock-star face and mesmerizing turnout; Smith is a broad-shouldered fellow with a tender, troubled gaze. Lean, pale Hannon is like an elegant egret; Rein has big baby doll eyes and the air of a poetess. Their strength and connectedness give Cunningham?s gestures a controlled drama. For info on Alma Esperanza Cunningham Movement?s remaining shows, click here.