Is it insanity to see six performances of “Swan Lake” in eight days? My review of all six casts in the Chronicle:

“San Francisco Ballet’s “Swan Lake” is a runaway box-office hit. Helgi Tomasson’s new production, which closed Sunday, filled 99 percent of the War Memorial Opera House over nine performances, playing to more than 28,000 people and taking in $2 million. That’s a record for a full-evening ballet at the company.

Apparently a recession-beleaguered public is hungry for transcendent romance, and despite a less-than-stellar staging, they got it. All six Swan Queens did justice to the timeless coupling of Tchaikovsky’s score and Lev Ivanov and Marius Petipa’s choreography, updated by Tomasson. For a troupe whose international reputation tends to rest on stylish male dancing, the past week displayed a dazzling range of fully artistic ballerinas.

The double role of tragic Odette and the evil black swan Odile is a revelation of essential inner temperament. Lorena Feijoo is a powerful woman, and she delivered what a friend of mine dubbed “a full-on rock-star ballerina performance.”

Then there are those dancers whose essential temperament is unbridled emotional honesty, who put their technique in constant service to dramatic depth. By far the most scintillating Odette/Odile was Sarah Van Patten.” 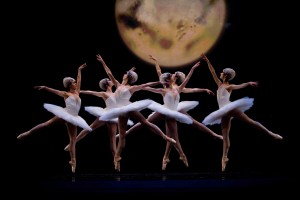