It was good to continue catching up with the Bay Area dance scene at the June 1st performance of Savage Jazz Dance Company’s “Dances for Oakland” at Laney College, especially with Menlowe Ballet sharing the program. This new company, based in Menlo Park, is led by Michael Lowe (hence the troupe’s punny name). Lowe was a star at Oakland Ballet during that company’s glory days of reconstructing Ballets Russes masterpieces, and proved himself a serious talent in choreography with his early pieces for Oakland Ballet about a decade ago. But then Oakland Ballet began the wild ride of its many foldings and pale reincarnations, and Lowe lost his vehicle.

He’s back strong now. In “Plague,” an eight-dancer suite set to a hodge-podge of string music (including, it must be said, some overly trod pieces by Arvo Part and Christopher Tye), the Menlowe Ballet stacks up beautifully against local chamber ballet groups such as Company C Contemporary Ballet, and even Smuin Ballet. The dancers, many longtime Lowe disciples, dance with sharp, controlled intention. Their stylistic consistency and ensemble synchronicity is especially impressive for such a recently formed group. They move as one school of sleek, muscled fish.

“Plague” was not my favorite ballet I’ve seen from Lowe, but it called upon all his skills, and I especially enjoyed the steps’ driving rhythm and syncopation, and the flashes of inventive folksy arms. Lowe has a gift for making his phrases just novel enough to be interesting, not so dense that the gestures lose meaning. And he always constructs his ballets around a narrative arc. This time the vague story revolved around an imposing man-creature in the form of broad-shouldered Damon Mahoney, who seems to both terrify and enchant the women, especially Mariko Takahashi in black. The partnering had Mahoney clutching the women by their necks. In an especially memorable phrase, Takahashi lunged her head towards the waiting vice of Mahoney’s hands, like a magnet resisting the charge, and then lost her battle against the attraction right as Mahoney retracted his hands, so that she flung her whole body upon his chest.

Like Lowe, Reginald Ray Savage is tremendously skilled at identifying talent and forging committed artists. The public Oakland School of the Arts is fortunate to have him at the head of their dance program. I can only imagine the demands on his time and energy teaching high school students, but it makes sense that he would not have much space left to develop his choreography, as seemed the case Friday. 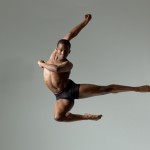 The smattering of pieces on display mostly called upon stock gestures—reaching to the sky and trembling, hands held in prayer. Formal development was scant. It was entertaining to note the influence of George Balanchine’s tense duets from “Agon,” recast with Savage’s vocabulary of turned-in lunges.

The standout exception was the closing “Meetings Along the Edge,” in which the pulsating music of Philip Glass apparently inspired greater structural inventiveness and some memorable hand-wagging motifs. The dancers, always high-octane, went into overdrive. Young Jarrod Mayo uses every muscle at all times, with the result that he can freeze in the air and slash through space with equal joyous force. He is something special, to be sure—and anyone entranced by him owes great thanks to Reginald Ray Savage for guiding the beauty of his dancing into the world.