My review of the Hagen & Simone/TONGUE double-header is now up on Voice of Dance:

?ODC Theater manager Rob Bailis has a flair for provocative programming. Last weekend he paired San Francisco?s Hagen & Simone with Los Angeles?s TONGUE. Hagen & Simone?s Future Perfect played up the duo?s shared obsession for fashion; TONGUE?s Tertium Quid began with a bass-pounding fashion show. One work showed moments of surprising emotional depth but needed more theatrical slickness; the other was all surface style. But the promise of each was compelling, and the shortcomings worth pondering.? 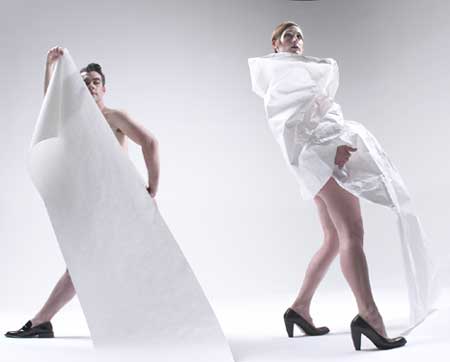 There was little of movement interest in Future Perfect?almost the only dancing consisted of Jenkinson performing ballet class moments, occasionally violated with modernist upper body (breaking the “rules” of classicism, natch). But the script, though in need of trimming, was often strong, and flashes of personal drama and thematic complexity hinted at the heart of the work waiting to be discovered through focused revision. In the most gripping section, Clarke told of throwing his grandfather?s vest away after a heckler called him “queer.” And in that moment it was clear that Future Perfect was fundamentally about insecurity. Do the dictums of fashion make us insecure or do we turn to fashion to mask deeper insecurities? That question charged the show with pathos even as the ambiguously rebellious conclusion rang half-hearted.?

?Southern California is not known as a hospitable locale to dance, and that alone makes TONGUE a success story. The eight dancers (Peter Volk also appeared as a guest) are toned, tanned, and tenacious, and choreographer Stephanie Gilliland?s aesthetic is quintessentially Los Angelean. The movement base is contact-improv inspired, but as tough as an action movie hero and as teasing as a Hollywood pole dancer. The men are brawny and bare-chested; the scantily clad women are of all shapes, some strikingly curvaceous. They roll over one another and slice the air like tomahawks and pause in muscular headstands. In one favorite and overused move, the dancers kick both legs into the air in a sideways stag, as though the rug had been pulled out from under them, then drop like bricks to the floor.?