The reviews are in for Mark Morris?s ?Violet Cavern,? which had its West Coast premiere at UC Berkeley?s Cal Performances last Friday. The Chronicle?s Steven Winn liked it, with one tiny caveat:

?The second half of the evening was devoted to the West Coast premiere of “Violet Cavern,” a knottily drawn yet expansive full-company work on an exciting commissioned score by the jazz trio the Bad Plus. Happy as Morris fans may be to revisit familiar choreography from his repertoire, something new always heightens the mood. Almost a quarter century after founding his troupe, Morris remains one of the great, seemingly inexhaustible artists of his day . . .

The weekend’s Program A did not reveal Morris and his dancers in their most openly affecting or wittiest temperaments. But in their organic evolutions, both “Mosaic & United” and “Violet Cavern” turned Morris’ inventive vocabulary into an eloquent and absorbing language. Even when the meaning gets muddied at times, Morris dances speak in a lovely, strange and memorably distinctive voice.?

?A collaboration of music, art and dance met up with imagination and wit as the Mark Morris Dance Group kicked off its two-week run at Cal Performances with the thoroughly enjoyable “Violet Cavern” on Friday night.

Set to a commissioned score by the Bad Plus — the reverberant jazz trio of Ethan Iverson, Reid Anderson and David King, who accompanied “Violet Cavern” live on Friday night — this engaging and highly visual work for 15 dancers isn’t going to compete for precedence with such Morris masterpieces as the brilliant “L’Allegro, il Penseroso ed il Moderato,” which the company performed last season. Nevertheless, it amply demonstrates why Morris holds a place among the top flight of American modern choreographers.?

But Voice of Dance?s Allan Ulrich was none the less respectful but more decisive about deeming ?Violet Cavern? one to file under ?forgivable failures?:

?What?s different about Violet Cavern is that it is set to an original jazz-pop score, one of the few commissions the company has undertaken. If an earlier commission, Rhymes with Silver, elicited a wondrous piece of music from the late Lou Harrison (you can hear it on a New Albion compact disc) and a fanciful skein of movement from Morris, the results in this new work are more problematic. This is one choreographer who starts with the music and we should, too. Violet Cavern is the work of The Bad Plus, a trio comprised of pianist Ethan Iverson (MMDG?s former music director), bass Reid Anderson and percussion David King. It is pounded out in the Zellerbach pit and seems to consist of two motives – an assertive sequence of chords and more lyrical episodes. Listening to the music alone for 50 minutes might prove a trial, but, in the presence of Morris? 15 bright dancers, the music, paradoxically, seems more, rather than less overextended.

What Morris has done here is to weld the open, improvisatory structure that defines jazz to a carefully plotted movement plan that leaves the viewer bewildered. Choreographers who don?t customarily take to Morris? work (some feel he is hamstrung by his music) have found much to like here, because, as one said, the dance allows a degree of gestural expressiveness missing elsewhere in his dances. You can see where they are coming from at the beginning, when Michelle Yard sails downstage, where a group of dancers recline in darkness. You can see it, too, in a twisty encounter between Bradon McDonald and Julie Worden.

Still, the choreography is more tightly plotted than one might expect. Morris has found his own striking series of imagery here. The repeated episode of two supine dancers pushing themselves across the stage while propelling an erect dancer (or is the latter propelling them?) seems fabulously emblematic of the collaborative spirit. The choreographer mines the tension and sweep to be derived from waves of dancers rushing on and offstage. We get occasional ballet references. There are allusions, also, to pedestrian movements: are those push-ups a group launches at one point? What does not emerge is a satisfying structure. Violet Cavern, unusually for Morris, seems padded, accumulative, rather than organic.? 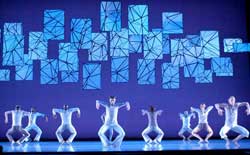 I?m with Allan on this one. Morris does his best with an overblown score constantly revving up to another drum-fill finale. But despite some beautiful motifs?dancers sliding through their partners? arms into deep, shoulder shrugging plies; one dancer walking backwards with her eyes covered as another dancer slaps her extended hand?I hope the Mark Morris Dance Group will not repeat ?Violet Cavern? often. Because it doesn?t suit Morris?s particular brand of musicality, it?s fuel for those who (mistakenly) reject his musicality as too simple. One example of how it showcases what Morris does well to very unflattering effect: Toward the end of ?Violet Cavern,? the ensemble begins regrouping in rows and peeling off in complex canons?and it looks like a weirdly dour Esther Williams water ballet. Structural devices that Morris can make illuminating when set to, say, Handel, or deliciously camp when set to Richard Rodgers, look downright pretentious here.

That said, Michael Chybowski?s lighting of Stephen Hendee?s overhead panels was a marvel of isolated jewel tones. And the current company is so strong. Julie Worden, more the goddess every year, is one of my favorites, along with the lush Bradon McDonald. “Mosaic & United,” while not one of my “desert island” Morris works, is well worth repeated viewings, and carried a pungent air of ritual and mystery Friday night.

Program B, which opens Thursday, includes a world premiere and the majestic ?V.? For details, click here.