My review in the San Francisco Chronicle:

“A man and a woman begin at opposite corners of a white floor. She is naked except for a white fur coat; he is also nude, except for a black one. Crouching, convulsing, they slither out of the coats, meet in the middle and connect. But always they repose in a mirror image: lying atop each other head to crotch and crotch to head, or he standing and she clinging to him upside down. 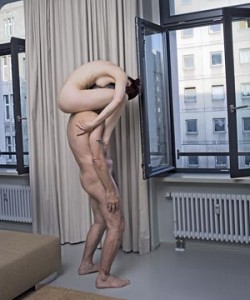 “The Symmetry Project – Study #14,” which Maria Francesca Scaroni and Jess Curtis continue to dance through March 29, offers a deeply thoughtful, entrancingly beautiful simplicity. It filled the small venue at CounterPULSE on Thursday with admirers of Curtis, a founding member of the influential ’90s collective Contraband, now dividing his career between Berlin and San Francisco.

Billed as a “(re)Presentation” of last year’s “Study #7,” the current version looks substantially like what anyone who saw those performances would vividly remember, but with a new coda. The structured improvisation proceeds through clear phases, first serene, then explosive, with Klaus Janek’s live score shifting from soft breaths to pounding dance-club beats. One of the more riveting sections is built around slapping, Klaus responding to the frenzied flailing of limbs with busy pluckings on an electronic bass. Regina Teichs’ kaleidoscopic video fills the wall as Scaroni and Curtis shudder and sweat.

They are thoroughly exposed and never titillating – even in their most intimate configurations, Scaroni and Curtis move with steady, intense focus on each other. One of the most compelling aspects of “The Symmetry Project” is its constant flux between the human and the abstract. ”